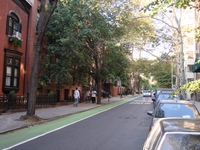 Not much has changed. The weather is still great, the job is going great, and the weekends are going great.
I spent over an hour last Saturday in line at the only Time Warner Cable customer service establishment in Brooklyn. There is one establishment with two customer service windows for 2.6 million people.
Subsequently I received a parking ticket in Brooklyn Heights for returning to my car twenty seconds after the meter expired. I know it was twenty seconds because the meter maid told me that she “just saw it expire twenty seconds ago.” Subsequently she had to nerve to have me wait while she finished typing in the info into her machine.
Thursday I got up early and took a trip to the Austrian Consulate to apply for a new passport. Well, first I had to have photos taken. I had these taken at eight at the consulate’s recommended photographer on 42nd Street (the consulate is on 69th).
It turns out the photos were not up to specs, and I had to travel back down to the photographer and have them retaken. Apparently my eyes were slightly too low and the color was bad. At least the representative at the consulate called the photographer so I could have them retaken for free.
So yeah… That’s what’s new.