Staten Island isn’t exactly known for its bicycle friendliness. Nevertheless, over the past few years, several bicycling improvements have been made. Much of this has occurred in the northeastern section of the island by its most popular beaches. This area is still on my to-do list.

In the southern section of the island is home to Wolfe’s Pond Park, itself home to one of the three New York City mountain biking courses. Seeing that I had recently visiting Cunningham Park in Queens, one of the other two, I thought starting a trip here would be an interesting followup. 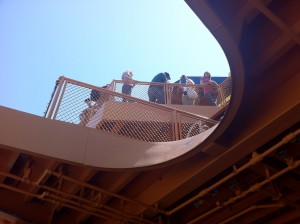 Riding on the lowest level of the Staten Island Ferry

Unless you live on Staten Island, getting to Wolfe’s Pond Park is quite the adventure as well. From northern Brooklyn I ended up taking the East River Ferry to Pier 11 in Lower Manhattan, followed by a relatively quick trip over the Staten Island Ferry terminal. This portion should only take three minutes (it did on my return), but during the daytime when the weather is nice, this can take a few minutes more due to crowding by tourists and other pedestrians.

As a bicycle-riding passenger, you get to ride on the bottom level of the ship. Many ferries, including the most modern ones built in recent years, are equipped to transport cars. However, some of these ferries have never even done so as they’ve been banned since 9/11. There is no fee for either you or your bike.

With a bicycle on the Manhattan side, you enter the terminal and walk your bike straight through to the former car holding area below the second level (which is only for bike-less passengers). After a police dog has determined your bike safe of anything suspicious, you are asked to wait in a sheltered bike waiting area. Once all passengers have exited, a ferry worker will yell “bikes!” and you can now board the lowest level of the ferry where you will find some bike racks. In theory, you are now free to do whatever you want during the 25-minute trip, including visiting the other levels, the restrooms, and the snack bar.

Once arriving on the Staten Island side of the bay, you exit on the lower level of the ferry to former car waiting area of the Staten Island terminal. From here, you actually need to enter the terminal via an elevator to get to the Staten Island Railroad (SIR), which will be used for the rest of the journey.

Once inside the terminal you follow the signs and eventually descend half a level down to the SIR station. Here, if an agent is present, you can swipe your MetroCard, turn the turnstile with your hand, and they’ll open the gate for you. If there is no agent, well, enjoy lifting your bike over the turnstile. I have reached out to the MTA on what the proper procedure should be in this case. Note that since the SIR only has turnstiles at the northernmost two stations, you’ll have to repeat this on the way back as well.

Once you’re on the SIR, the ride is pretty much a 23-minute subway ride to Prince’s Bay station. From here you exit the station, ride one block left, take a left onto the uninhabited Herbert Street, which leads you right into the trails. 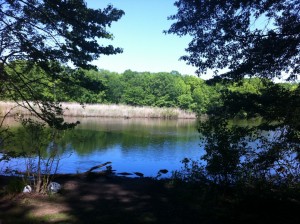 The mountain biking trails in Wolfe’s Pond Park are divided by Hylan Boulevard, and the two sections have a significant riding experience. The northern section is not particularly well marked but has lots of long relatively flat sections. I thought I was following a path when I almost rode into a lake. I couldn’t tell whether the path continued along the lake or not and the immense mud caused me to backtrack and find myself another (or perhaps the intended trail). Aside from this lake mishap, nothing I encountered up in this section was particularly difficult.

Once reaching Hylan Boulevard, you can cross into the southern section of the park by biking west (to the right when you exit the park) until the next intersection and then crossing the boulevard there. Here you’ll find a small entrance. 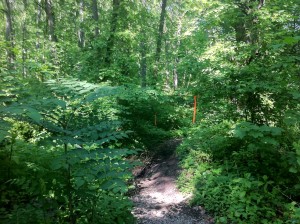 The southern section of Wolfe’s Pond Park is very clearly marked with pink ribbons hung from the trees and shrubs. The terrain is also much more challenging and you’ll often encounter downed trees in your way, probably leftover from Hurricane Irene. Hurricane Irene also destroyed the park’s major pond, and seeing it devoid of water is rather depressing.

It appears that more runners than bicyclists are using this section of the park as I encountered numerous. 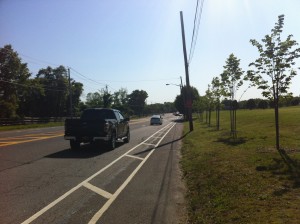 Once you’ve had your fun on the trails, it’s possible to explore Staten Island a bit further by biking south on Hylan Boulevard, which has painted bike lanes. It’s a pretty uneventful segment, save for the Mission of the Immaculate Virgin at Mount Loretto, which has an impressive property.

The bike lanes ends at Paige Avenue, where you can take a right and bike down to its intersection at Amboy Road, where you’ll find some shops, including a convenience store, which is great for picking up a refreshment.

Amboy Road is not recommended for biking, as its very narrow. Cutting through the parking lot of the strip mall across from the convince store (Tottenville Square), however, you can almost entirely avoid it. Watch for a gap in traffic and zip the 100 feet over to the next intersection, Bethel Avenue. Now you can relax. Welcome to a suburban residential neighborhood. Four blocks in you’ll find Craig Avenue, which will take you into Tottenville proper.

At Main Street, you can check out this cute old former village, and then at Bentley Street you ride downhill to the dead end and view the Arthur Kill and New Jersey across it. You are now next to the Tottenville SIR station and will find a smooth ramp up to your train back to St. George Ferry Terminal. 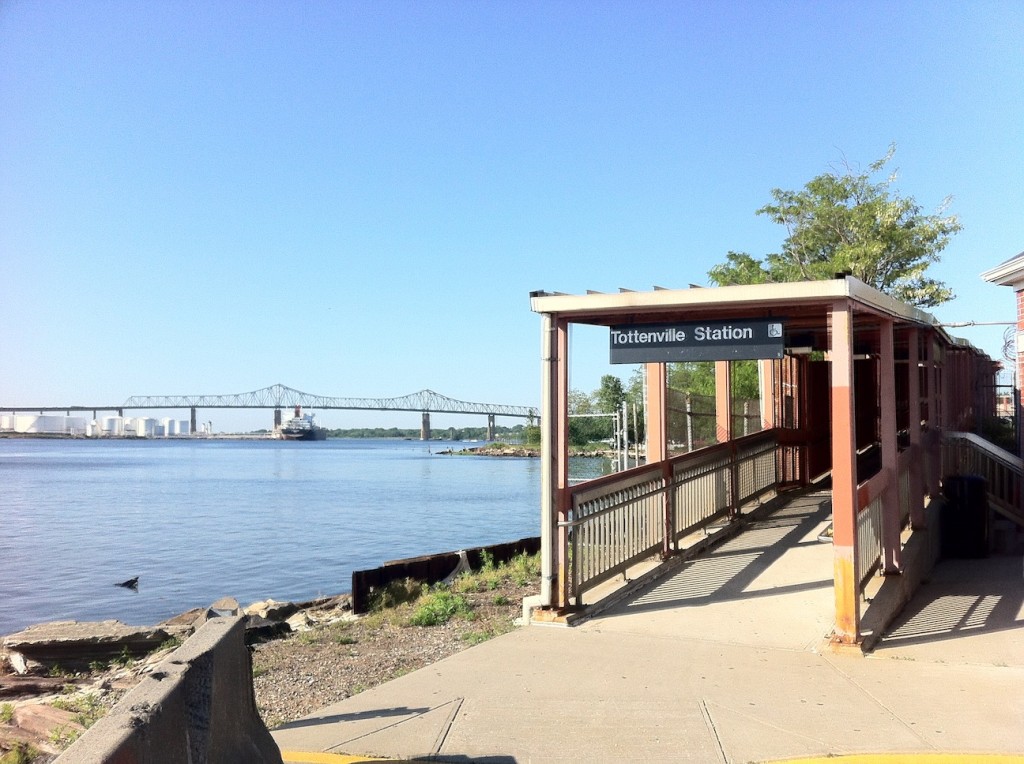 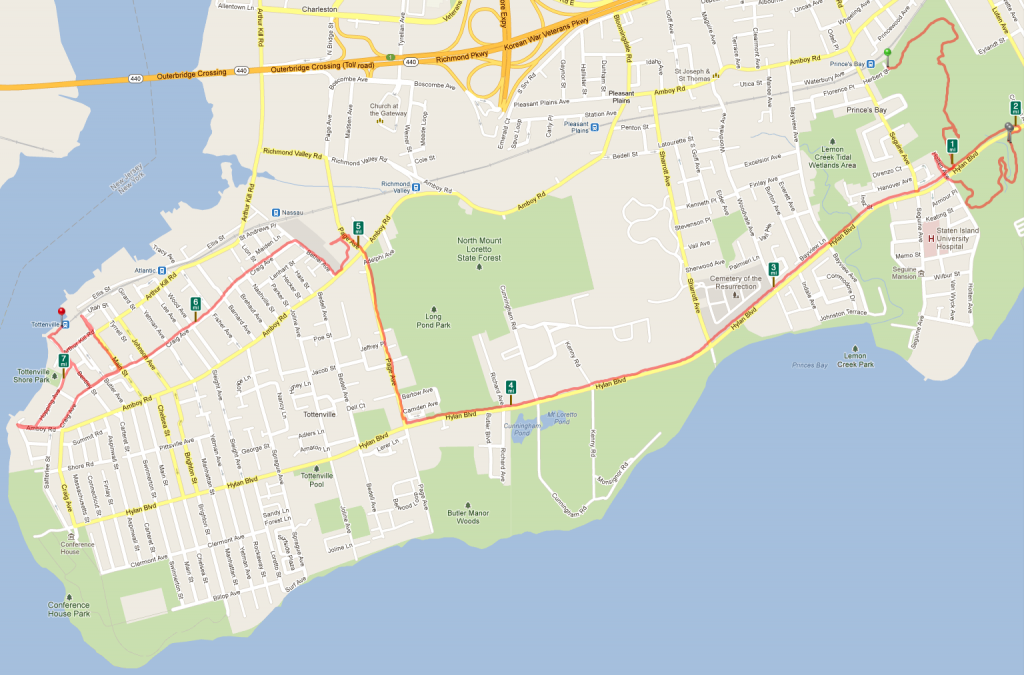