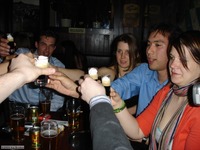 Address: Dominikanerbastei 17, 1010 Wien, Austria (Map)
Directions: At Schwedenplatz find Postgasse (close to Mr. Lee). One block up Postgasse you will see the street Auwinkel. Take a left and you’ll see Merry Monk on your left.
If you’re arriving with the U4, it’s easiest to take the Urania exit from the platform, and then simply cross the Franz-Josefs-Kai and continue up Dominikanerbastei for one block.
The Vienna Airport Lines’ bus from the airport to Morzinplatz/Schwedenplatz will drop you off right next to Merry Monk. If you have an early flight from the airport you can even spend your night at the Monk and take the five o’clock bus to the airport!

Hours: Daily until 4 or later, Closed Sundays in August
Website: www.merrymonk.at
My favorite nighttime establishment in Vienna, Merry Monk is conveniently located near Schwedenplatz in Downtown Vienna. I prefer beer over any other adult beverage, and it is impossible to beat the quality and selection of Merry Monk and its parent establishment, 1516 at Schwarzenbergplatz, where the beer comes from. Merry Monk regularly carries several of the unfiltered, unpasteurized 1516 brews, along with a beer from a guest brewer, and several mainstream beers and ciders such as Caffrey’s, Guinness, Killkenny, and Stowford. If there’s no draft selection to satisfy you, or if you want to go even more exotic, there’s a full line of bottled beers as well. As would be expected, there’s also a full line of spirits. And yes, ladies, Merry Monk does carry Smirnoff Ice, but it’s a serious waste of money to drink that here.
The atmosphere can either be great or incredibly somber, which is dependent on a variety of factors: First, weekends are much better, even during vacation periods. Second, although Merry Monk opens at six in the evening, it’s often dead before eleven or midnight. Thirdly, Merry Monk is also kind of a sports bar. If there’s an interesting game, it’ll be packed. If your going to be touring multiple bars in Vienna, you might as well leave this one until later in the evening.
The kitchen is open later than most drinking establishments, and the menu consists of over a dozen options, including sandwiches, burgers, chips/fries, and Austrian-style “stuff on bread”.
The prices are pretty good, generally €3.10 for 0.5L (quasi-pint) and €5.90 for 1.0L (Austro-Bavarian-style Maß). There are a couple places at which you’ll get cheaper beer in Vienna, but their beer is horrible.
The staff is simply amazing, there’s no other way to put it.