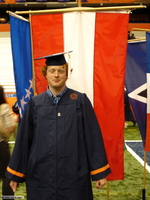 It’s time to finally synchronize my weblog with my life again…
I passed all my exams and graduated… I suppose that’s the main point that’s conveyed in this entry here!
Let’s start Wednesday night, about nine hours after I handed in my last assignment. There was this thing downtown called Senior Celebration going on. Mike and I took public down there, had four or so beers (at least one was free), talked to people, and then hopped on some shuttle back to the Hill. We told the driver to drop us off at Faegan’s, where we spent another couple hours.
Saturday at 9 a.m. (way to early) was convocation. Convocation is like a mini commencement for just your college (SU has somewhere around 13). Being in the largest college, Arts & Sciences, this took forever. There were a couple of speakers and then they called every single name so we could get an Arts & Sciences pin. Weeew!

My parents came up Saturday afternoon, and after we had dinner at Danzer’s German Restaurant, I went out to Faegan’s, and had one of the best nights I’ve had in years. Nights out haven’t been fun in ages, as it seems everyone just stands/sits around. Friday night, however, everyone was having about as much fun as if they were at a high school house party.
Sunday morning I got up at 6:15. Subsequently, Mike and I were among the first people at the Carrier Dome, which assured us front row seats of our section. We were about as close to the stage as you can get as an undergraduate (about five rows in).

Commencement wasn’t bad. Billy Joel gave a short repetitive speech, but everyone forgave him because he’s not much of a talker. He led the crowd through a Syracuse University version of “Down in New Orleans”, which you can see here. That night everyone went out one last time for Senior Sendoff at Faegan’s, which was decent.
Monday I stuffed about as much junk into my Saturn as it could hold and headed home. Tuesday I drove my dad to JFK Airport. Thursday I went back up to the apartment with my parents’ Subaru and crammed it up as well. This Wednesday my mom and I will rent a van and finish off the move-out, taking home big items like my bed and my desk.
I’m trying to obtain some order in my parents’ basement, while also starting to pack for Vienna. I leave Sunday afternoon and get there Monday night… Yeah, that’s another story.