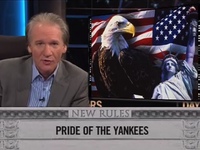 MAHER: And finally, New Rule: America must stop bragging that it’s the greatest country on earth and start acting like it. Now, I know — I know this is uncomfortable for the faith-over-facts crowd, but the greatness of a country can, to a large degree, be measured. Here are some numbers: Infant mortality rate, America ranks 48th in the world; overall health, 72nd; freedom of the press, 44; literacy, 55th. Do you realize there are 12-year-old kids in this country who can’t spell the name of the teacher they’re having sex with?
Now, America, I will admit, has done many great things: making the New World democratic comes to mind, the Marshall Plan, curing polio, beating Hitler, the deep-fried Twinkie. But what have we done for us lately? We’re not the freest country. That would be Holland, where you can smoke hash in church, and Janet Jackson’s nipple is on their flag.
And, sadly, we’re no longer a country that can get things done, either. Not big things, like building a tunnel under Boston or running a war with competence. We had six years to fix the voting machines. Couldn’t get that done. The FBI is just now getting email!
Prop 87 out here in California is about lessening our dependence on oil by using alternative fuels, and Bill Clinton comes on at the end of the ad and says, “If Brazil can do it, America can, too.” Excuse me, since when did America have to buck itself up by saying we could catch up to Brazil?! We invented the airplane and the lightbulb. They invented the bikini wax, and now they’re ahead?!
In most of the industrialized world, nearly everyone has health care. And hardly anyone doubts evolution. And, yes, having to live amid so many superstitious dimwits is also something that affects quality of life. It’s why America isn’t going to be the country that gets the inevitable patents in stem cell cures, because Jesus thinks it’s too close to cloning!
Oh, and did I mention we owe China a trillion dollars? We owe everybody money. America is a debtor nation to Mexico! We’re not on a bridge to the 21st century. We’re on a bus to Atlantic City with a roll of quarters.
WHITMAN: Take those — bring those quarters to Atlantic City, yes.
MAHER: And this is why it bugs me that so many people talk like it’s 1955 and we’re still number one in everything. We’re not. And I take no glee in saying this, because I love my country, and I wish we were. But when you’re number 55 in this category and number 92 in that one, you look a little silly waving the big foam “Number One” finger.
As long as we believe being the greatest country in the world is a birthright, we’ll keep coasting on the achievements of earlier generations and we’ll keep losing the moral high ground. Because we may not be the biggest or the healthiest or the best educated. But we always did have one thing no other place did. We knew soccer was bullshit.
And…and we also had a little thing called the Bill of Rights. A great nation doesn’t torture people or make them disappear without a trial. Bush keeps saying the terrorists hate us for our freedom. And he’s working damn hard to see that pretty soon that won’t be a problem.