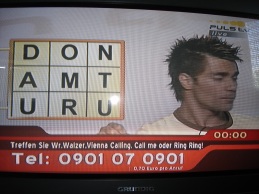 So I turned on the TV about an hour ago and was just randomly channel surfing, when I stumbled upon a fairly new local channel here in Vienna called “puls tv.” They had the “Wien Quiz” call-in game show going. There was the puzzle above. Not one person called in for 45 minutes even though it was ridiculously easy because the dude kept giving tons of obvious clues. Let me give you an American equivalent:
EMP
ISTA
RETE
Then I’ll go on to give you clues like: It’s a skyscraper in New York City, you can take an elevator to the top, etc.
It shouldn’t have taken you longer than a few seconds to fire out that that’s the Empire State Building. In the example on TV it was Donauturm (Danube Tower), which any Viennese with half-a-brain could have figured out. This leads me to believe that no one was actually watching the channel (at least with volume) besides me! Or they were all as hesitant as me to call in because the call costs 70 cents. after about 45 minutes a woman called in and answered it correctly and won ’Ç¨100 (about $120). I was really pissed at myself for not calling in. Immediately after this they started the “Hallo Wien Quiz,” where you call in (for 70 cents again) and their caller ID saves your number and then random calls one back. You have five minutes and you can call as often as you want. If your phone than rings you have to answer “Hallo Wien Quiz.” The same friggin’ woman won again… This time ’Ç¨50 (about $61). SHe was most likely the only one who called in again. So I blew the easy chance of getting an extra ’Ç¨150 (about $181) for doing absolutely nothing.
Update: Well, I have to retract the above a little bit. It seems, as you can see in that TV shot, you only get through to the studio if you get one of the songs, listed on that red stripe, on the line when you call in. My dad clarified this to me because he had read about it in the paper. Nevertheless, the fact that the same woman won twice still leads me to believe that no one watches the show and that it’s not too hard to win.