As a part of my annual whining about how air-conditioning is nearly non-existant in Austria, I’d like to present you with the following facts:
The first air-conditioned subway cars in New York City began operation in 1967. The Vienna subway opened twelve years later, in 1979, and none of its brand-new cars were air-conditioned. In 1987 the next generation of subway cars were rolled out (they look almost identical to the first ones), but these weren’t air-conditioned either. Finally in 2000 a prototype of the third generation was rolled out, and it’s air-conditioned. It won’t be until late this year before more of these start rolling out, however.
So Vienna is 33 years behind in subway car technology, at least concerning air-conditioning. I can recommend the Austrian Federal Railways’ S45 line though, as it seems to now be run with brand new air-conditioned trains, as I experienced last night: 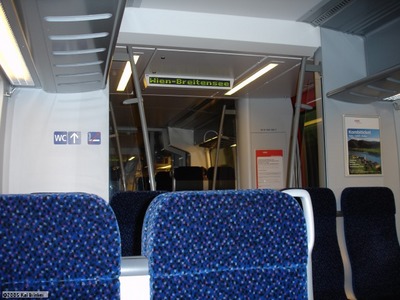 Inside a Talent Train on the S45 in Vienna