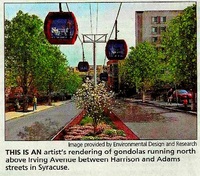 Ski lift, meet University Hill!
There is no place in the world that I have lived in that has such an insane amount of ideas for bettering the life of its citizens than Syracuse. At least once a month, a new, big idea comes out, claiming not to be just a vision, but also being feasible.
Most of these ideas over the past few years have been in relation to the DestiNY USA Project, an entertainment, hotel, and research project that has now reached an estimated cost of nearly ten billion dollars. It was first proposed April 30, 2000, but, save for a “groundbreaking,” no construction has happened yet. A good point to be made though is that billions of dollars need a lot of raising, which requires a lot of planning, so there is still a good amount of hope in this project.
In fact, DestiNY USA developers The Pyramid Companies keep the public excited by constantly adding features to the project at a periodical rate. Besides the local news stations and the local newspaper no media outlets really care anymore. In fact, the last article many out-of-town papers published was about a quickly-dismissed rumor that the project was dead, which occurred nearly two years ago. They actually published the dead rumor, not its correction around three days later.
But Syracuse remains hopeful that something besides snowfall amounts and a great college basketball program will set it apart from the rest of the country. Help comes from numerous little, often non-descriptive “unveilings of plans,” which “keep the dream alive.”
Besides entertainment complexes, hotels, and technology parks, there is another favorite topic of dreaming: Transportation
It was a craze started by DestiNY USA’s plans, which have included a monorail from the beginning. This monorail would run from Syracuse’s Hancock International Airport to Syracuse University, via DestiNY’s structures, Alliance Bank Stadium, the bus and train station, and Downtown. Estimated cost: $750 million. Later Personal Rapid Transit (PRT) was also added for parking lot connectivity.
This past Sunday, The Post-Standard featured a plan by millionaire Tom McDonald which appears to much cheaper to build and efficient for Syracuse’s size: A gondola line. There’s already even a name for it, S.C.A.T, short for Salt City Aerial Transit. Its cost: About $5 million for the first segment, which would run from Syracuse University to Downtown, about a third of its route to the bus and train station. And, like a ski lift, its gondolas would be only a short distance apart, which would mean no more waiting for that infrequent CENTRO bus or OnTrack train. Furthermore, because gondolas cost very little to operate, this system could run all day and night.
This is the most viable idea yet. McDonald says he can raise the $5 million easily, and that only thing he would from the government is permission to put up the system. This bypasses the major blocker to most of the above-mentioned visionary projects: Taxes. DestiNY, for example, wants tax breaks, which has led to long battles between the Onondaga County and city, two government levels which never seem to be able to agree. 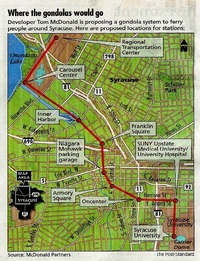 Proposed route of the system
A similar system is installed in Morgantown, West Virginia which has a pretty sucessful rail-based PRT system which has small units as well. Morgantown only has 27,000 people and a university with only about 6,000 more students than SU. It was built in the 70s and is pretty expensive to operate because of its heated rail, a problem the gondola system wouldn’t have. It has about 15,000 daily riders.
I just hope something new is built around here soon… I’m bored!
Further reading:
DestiNY USA
Post Standard: Will Gondolas Link SU and Downtown?
Wikipedia: Destiny USA
Wikipedia: CENTRO
Wikipedia: Morgantown PRT
Wikipedia: OnTrack