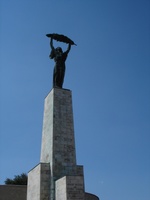 Yesterday, I spent the day in Budapest. It was quite a fun change of atmosphere from sitting around in my apartment all day. It takes a little under three hours to drive there. I hadn’t been there since 1994, and it has changed a lot. If you ignore the difference in language, Budapest isn’t all that different from Vienna anymore. It has really modernized.
Driving there went pretty well. I found out I had to buy a €7 vignette for four days, which is the shortest one, to use the highways. In total I exchanged €23, which I easily used up, especially since my appetite is back stronger than ever. I first stopped at a Subway, and ate a 12-inch sub meal. Then I found my way to the “Citadel” hill, where I had also been with my parents eleven years ago. They tried to extort an entrance fee for the actual structure, which I didn’t want to go into anyway. I ended up taking a lower path around this area, and found my way to the scenic view point without paying. After this I bought some stuff at a supermarket, and then walked along the Danube for a bit and then found the main shopping street. I then ate at Burger King (I’m horrible), after which I tried driving home. I took a wrong turn, which led me across a bridge that I should have crossed the opposite direction, because it would have led me home. I noticed this and tried to find some way to turn around, but, like Vienna, this is pretty hard, because the main entrance/exit roads don’t allow any turns.
So I ended up wasting another 45 minutes or so getting lost in communist-built ghettos. I then eventually got on a semi-highway, which eventually led me to the right highway a couple of miles outside the city. I got home around nine.
The photos can be found here.