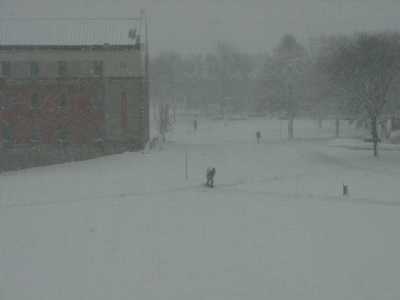 Yesterday morning I woke up to the aftermath of a miniature snowstorm, something I’m going to have to get used to! It was quite fun sliding all over the paths of thin snow to get to class. The college quite efficiently removed the snow from the paths, except they didn’t quite think of the trace that was left behind. They should have salted the paths as well. Anyway, I had one of my best days here yesterday as well. I got back a GOV 101 paper that I thought I had bombed. I ended up receiving a B+ on it, which isn’t easy in that professor’s class. I also got a B on a FIA 246 test, which also surprised me. Actually, with an extra credit option that professor gave; I might actually get an extra twenty points. I’ll have to wait and see for that.