Staying true to my character, I put off posting about my spring break for over two weeks, simply because I realized that it would require a lot of writing. But now the time has come.
We left Friday morning (March 10) at around 9 am. We were shocked by the heat as we stepped out of our apartment, as it was around 60°F (16°C). After driving both our cars down to my parents’ house in Vestal and having breakfast, we continued on in my car to the Newark Airport, where, after a time-consuming parking spot hunt, we took the monorail to the proper terminal and checked in. By now it was well over 70°F (21°C).
As we had been unable to previously reserve exit row seats or even seats next to each other, I got in line about 30 minutes before the gate counter opened. This proved somewhat successful, as we both received aisle seats across from each other. The flight was delayed coming in and delayed pushing back, but was otherwise good. Once landing in Copenhagen, we were delayed docking to the gate as some Thai Airlines plane was delayed leaving the gate.
Once getting into the airport, however, things went great. We got through the airport really quickly (the wood flooring is amazing by the way), and got a ticket for a train into the city that left almost immediately. As we got out of the train at Copenhagen Central Station, Jesper was coming down the stairs to great us. After a hilarious cab ride, we arrived at his apartment in Frederiksberg. After watching about an hour of random Danish television, Mike and I took a nap to work off some our missed sleep.
After waking up we ordered some pizza from the local “Pizza Burger House” (with assistance of course). We ate quite a lot from that place the first coupled days. Shortly after seven that evening we headed out to what would be a very long night. It all started at this place called L.A. Bar, which at this early hour and due to its small size looked like a neighborhood bar. The only customers for the first hour or so were Jesper, Mike, myself, and this Danish dude who had lived in California or something.

I gave Karen a call, and she showed up shortly afterwards. That’s when I found out that L.A. Bar is pretty well known (although I still didn’t understand why at this point). All of us went upstairs where I was surprised to find a dancefloor, which was completely empty at this early hour though. Emil showed up around this time too. For the first time in my life I had friends from Vestal, Vienna, and Syracuse, all at the same table.
We stayed at L.A. Bar a good while longer, until other people actually started showing up there! We eventually went to a place next door called Moose, which is like the Chuck’s (Syracuse) or Paddy’s (Vienna) of Copenhagen. After about an hour there, we went back to L.A. Bar, which had now heated up to the point that there was a line out the door and a coat check.
Many hours later, when I finally wanted to leave this fine establishment, I noticed that I had lost my coat check ticket. Despite my pleas, the staff wouldn’t give me my coat back. Fortunately Jesper was able to work it out. It had also helped that I had a post-it note with my name on it inside one of my pockets. After a long subway ride and walk, Jesper and I made it back to his place. It was quite the way to start a vacation.
As could be imagined, not much was going on with us the next day. A lot of Danish TV and more Pizza Burger House pizza! The evening (although later this time), we went to Rub ‘A Dub, apparently the place to be Sunday nights. This live reggae joint was pretty cool. We only stayed until one or two though, as Jesper had class in the morning, and Mike and I were pretty tired as well.
Monday Mike and I locked ourselves out of Jesper’s apartment for four hours, as apparently we were ringing the wrong doorbell. We wandered around Frederiksberg (an independent enclave in Copenhagen) to kill time, checking out a supermarket (which had several kinds of Brooklyn Beer from Utica, amazingly) and a pharmacy (long line). After finding out the correct button to push, which was achieved by calling Jesper’s cell phone from a phone booth (I had left my phone in the apartment but luckily had his number on a sheet of paper), we were able to get back into the apartment. After Jesper got home we took an approximately forty-minute walk from his apartment to Christiania (via downtown).
Christiania is quite possibly one of the shadiest places in the developed world, and we left shortly after entering. It is nevertheless worthwhile to see if you visit Copenhagen, although you might prefer doing so in daylight. We subsequently took the subway back to Frederiksberg and went to sleep not much later after that.

Tuesday morning it was time to leave Copenhagen in order to check out Sweden. We got on a train around two, and about twenty minutes later were at the Malmö South Railway station. We picked up our rental car keys (they didn’t even ask for ID), and started the six-hour trip to Stockholm. Since Mike had been sick since Sunday night, I drove the entire way, which was further complicated by some snow during the last hour or so.
To make a long story short, we were screwed over by Travelocity, because it turns out our hotel was located in the probably furthest-out suburb of Stockholm, Södertälje. Luckily the hotel was located adjacent to a terminus of the Greater Stockholm commuter rail system (Stockholms pendeltåg). We took advantage of this train for two roundtrips: The first was Wednesday for stereotypical sightseeing, and the second was Thursday night to check out the nightlife.

Stockholm is a very confusing city, especially for nightlife. Thursday night we took the train to Södermalm (Stockholm South Station) and wandered around on the supposedly happenin’ street. Unfortunately it didn’t seem too exciting, and the prices were ridiculous. Correctly assuming that there would be cheaper places down side roads, we wondered around until we found a “decently priced” establishment, where we had a couple beers.
By 9:30 the next morning we were on our way to Gothenburg, a ride that included a stretch of annoying alternating three-lane highway between Jönköping and Borås. Additionally, our car ran out of washer fluid, and we had to pay the equivalent of $7 for a tiny bottle.
Upon arriving in Gothenburg, we helplessly drove around trying to find the street called Kungsportsavenyn or simple “Avenyn,” the main street of this city. After a stop at a 7-Eleven, we were able to find it. I’m pretty sure that at one point I drove down the middle of a pedestrian zone!

In Gothenburg we were located in the Best Western Mornington Hotel, the most centrally located hotel of all. Quite a difference from our Södertälje experience! Shortly after arriving I called up Johanna, and we had coffee with her and two of her friends in a small shopping mall. Subsequently, Mike and I killed a couple hours writing postcards and essentially watching American TV with subtitles (Scandinavia is saturated with it). Around eleven we then went out looking for a decently priced location to celebrate St. Paddy’s day. We found a place two blocks from our hotel and stayed there until two. At least I can tell you that Gothenburg has a healthy nightlife scene. I still heard life outside at 5:30 am, after waking up in the middle of the night.

Around noon the next morning we left to return the car to Malmö and get back to Copenhagen. It was a very uneventful ride until Mälmo, where it took us ages to find the train station we had rented the car from. Finally around three it was back across the Oresund Bridge to Copenhagen, where we were this time picked up by Emil at the Østerbro station. As Emil correctly stated, everything in Østerbro is “about ten minutes” away. We walked to his apartment and then shortly afterwards to this food place where I bought the largest burger of my life.
We went out pretty late that night (around midnight). We missed the last normal bus by about ten seconds and had to thus walk about twenty minutes to catch a nightbus. This took us out to the suburb where the house party we were going to was. Along the way several of Emil’s (in these circles known as ‘Buff’) friends got on. The party was pretty cool as we were able to hang out with cool Danes, including members of the band Pix Lips, which Emil/Buff is the guitarist of.

After leaving this party, the night wasn’t over yet! We got on a cab and headed downtown to a bar, where we stayed until closing time (5 am). After hardly any sleep, and oversleeping by over an hour, we frantically left Emil’s apartment and started hurrying towards a main road to catch a cab. I guess we had forgotten about the “about ten minutes” rule of Østerbro, as we came across its train station and realized we were actually making good time and could take the train.
We checked in on time and got to the gate before most people, and everything went fine from there. After stopping by my parents’ house so Mike could pick up his car around eight that evening, we made it back to Syracuse around 9:30.
Despite having its low points, our “Scandinavian Break” was great. We got to see several cities of Scandinavaia, I got to see a total of four of my Vestal and Vienna friends, and we were able to spend sometime in the quite possibly coolest continent on Earth… Although as Johanna and I still both agree, nothing can match Vienna’s status as the best city in the world! 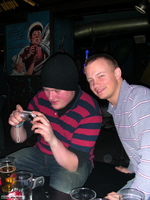 Special thanks are in order to Emil and Jesper, who housed us for a total of four nights and went out of their way to make it a great trip for us. This includes Jesper getting up at an early hour to pick us up form the train station and going out with us on a Sunday night despite having class the next morning. And of course there’s Emil, who picked us up from Østerbro on very short notice and who went out with us on very late notice! And if it hadn’t been for Jesper’s coat-negoiating skills, I would have been very, very, cold the first Saturday night!

Now I’m back in Syracuse, in well, I suppose the best city in Upstate New York, hah. Oh well, its not all that bad. If a cocktail of required chemistry and calculus classes didn’t plague me, maybe I could actually enjoy it more.
On a side note, at over 1900 words, this is most certainly the longest weblog entry I have ever written. Hopefully I’ll keep this thing updated on a more daily basis, so it won’t have to come to this again. But knowing myself, it most certainly will!
Want a retro trip report? How about Vienna Trip II from three years ago (March 2003). Those were the days…