Throughout past few weeks my dad’s apartment has been continually entered by wasps. At first I thought it was just because the windows were open. But over the past fews it has been pretty cool outside, and I haven’t opened the windows at all. Yesterday afternoon it became apparent to me that wasps were somehow getting into my apartment using other entryways. The peculiar thing was that besides the kitchen, which has a window, wasps were appearing in the bathroom and the toilet room, which have no windows. At one point yesterday night, it was dead quiet for an hour while I was sitting near the kitchen at the computer, when suddenly there was humming in the kitchen.
The first couple times I was pretty humane, using a glass and a piece of cardboard to remove them alive, but once I was getting four a day I whipped out the disinfectant spray, as I don’t have any insect-killing spray. 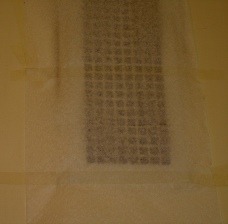 My initial fear was that perhaps there was a nest behind the microwave, but then I realized what was going on… There are two air vents in the kitchen, and one each in the bathroom and the toilet room. The one in the bathroom had a cord to close it, but the other ones are permanently open. I closed the bathroom one, and then began covering the others. In the kitchen I used thick envelops, and in the toilet room I used a paper towel, figuring this solution would let air in, but no wasps.
None of the covers are really that great because they’re not very tight. Nevertheless, no wasp has entered since, and it has been about eighteen hours.
If you’d like some advice on how to get rid of wasps that are already inside, check out this procedural guide I stumbled upon today: Kill Wasp, Vol. 1 Hah, I just realized that both I and that person made references to movies in our titles.
There has never been a significant problem in the past, so I think one of screens on the roof covering the air ducts must have torn.