Anyone who has ever lived with me knows I hate tuna. I really hate tuna. Last year I had a crossed-out tuna fish on my bedroom door, and my apartment-mate Gerry gave me a warning every time he opened a can.
Tonight, after a hellish-hot-and-long public ride home, I preheated the oven and took a pizza labeled “Pizza Quattro Stagioni” out of the freezer. See, here in Austria pizzas are like breeds of dogs. They all have unique names and you’re expected to know what each name entails.
The exception I guess is “Pizza Quattro Stagioni,” which I guess only means “Pizza Four Seasons.” I guess the “seasons” can change because I always bought this pizza by name, and never had a problem with the “seasons.”
Tonight I discovered that one of the “seasons” was tuna. Just to make sure, I gave the section a sniff, and despite being frozen, it smelled like the worst smell in the world… Tuna! My first attempt to bypass this misfortune was to try to scrape the tuna off. I got most of it off, but some of it was still frozen deep into the pizza.
Becoming a bit more drastic, I got out a large sharp knife and cut the section out. Cutting a frozen pizza is about as hard as meeting a girl in Vienna, but I eventually succeeded. My meal was reduced by 25 percent tonight, but I’ll survive. If I had eaten tuna it would have been a different story! 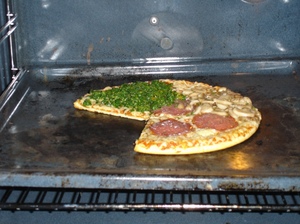