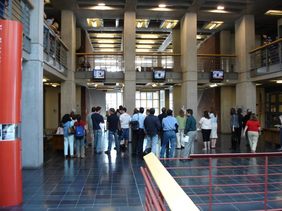 SU faculty, staff, and students waiting to see who the pope will be
The first thing I heard around me today when the pope was announced today (besides my German friend cheering) was talk about “the conservative guy” being elected. This has led me to publish the following rant:
The Catholic Church had to elect the most conservative pope ever because Catholics today are the most liberal they’ve ever been! It’s counterbalance, people!
Under Pope John Paul II, the “Pope of the People that wouldn’t let his people do what they wanted to,” less and less people were “being Catholic.” Catholics around the world reformed the Catholic Church themselves, even if the Vatican didn’t like it.
The fact of the matter is that the pope is a figurehead today. He has no real power outside his institution. About the only thing he can do is keep women from becoming priests and try to prevent homosexuals from from getting married in a Catholic church.
People, even those claiming to be “true Catholics,” are still going to have pre-marital sex, abortions, and beef on Fridays, because he can’t do anything about it. That’s a main reason why Pope John Paul II was so popular in the first place, because he wasn’t feared. He was a lovable man who forgave everyone and gave great holiday blessings.
It doesn’t matter which pope was elected today. Even if it had been the most “liberal,” there wouldn’t have been women priests or sanctioned homosexual marriages and abortions by the Catholic Church.
And either a liberal or conservative pope ought to crack down on priests abusing children, something a lot of people, including myself, believe JPII didn’t do enough about.
Anyway, in a week or two everything will go back to normal. Rome will shrink back to its normal size, and the next time we’ll see the Pope on TV will be around Christmas.