I did a lot the last few days; I just haven’t gotten to posting.
Friday afternoon a friend and I wanted to go to a local mall and go to Wal-Mart. Well, there was supposed to be a shuttle bus going there. But when we finally saw the bus, the guy driving it told us that the mall service hadn’t started yet. So we called a cab, and the guy told us twenty minutes, which is already a lot. But after thirty minutes there still wasn’t a cab, so I called again. Turns out the driver who was supposed to pick us up refused to because he had just recently visited Utica College and the people he was supposed to pick up hadn’t showed. So, finally after an hour some cab came.
Oh yeah, I forgot to mention it was raining like hell, as you can see on this radar: 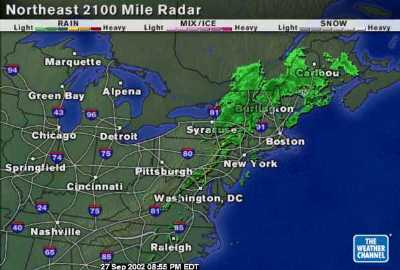 At Wal-Mart we bought tons of stuff, and since this was an open “big-box” type mall we had to run through the pouring rain with a Wal-Mart shopping cart to Radio Shack, where I bought some blank video tapes, and then to Office Max. Then we got a cab back to the college.
Friday night was tons of fun. I video taped some of it, but during the best part my camera failed, displaying “Warning: Dew Detected.”
Saturday I went with two friends to the local enclosed mall. Ironically the weather was nice that day, and we went to an enclosed mall, while Friday it rained and we went to a strip mall!
Anyway, I didn’t buy much there, but it beat sitting around at the college. I then took advantage of my free video rentals I had earned from a student employment job on campus. We rented, among other movies, 40 Days, 40 Nights, which we watched until about 9:30. Then we got some party supplies and partied late into the night. This time mostly other people did the filming!
Sunday was a typical Sunday. I slept real long (until 5 p.m. actually), and did little. Anyway, I got my GOV 101 class in like 80 minutes, so I’m going to go shower.