I’d like to thank everyone who came to my party on Saturday. I had a great time. This weekend in general was pretty amazing. It’s sad to see that Vienna still has life to it only a couple days before leaving. But luckily it’s only a little over two months before I’ll be back for the best night of the year Vienna ever experiences: New Year’s Eve! 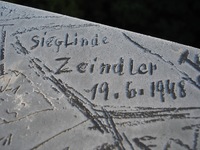 Last weekend I was pickpocketed for the second time this summer. It happened, like the first time, on the ride home from a night out. Today I checked out the Consular Information Sheet on Austria by the U.S. Department of State. Check this out:

There has been an increase in theft and pick pocketing on public transportation lines, especially on those lines coming in and out of the city center where even the most travel-savvy and alert tourists have lost everything to gangs of thieves operating in groups, causing great personal hardship and expense. 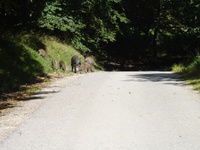 This past week hasn’t been too bad, event-wise. I went out Thursday, Friday, Saturday, and Monday, which were all great nights out. However, Monday was Kerstin’s last night, and it’s pretty depressing that she’s gone now.
I’ve gone for several walks in the Lainzer Tiergarten, which is close to my dad’s apartment. It’s a 2,450 hectar (6,054 acre) wildlife park. The weird thing though, is that I never see any mammals except wild boars, and that has only happened twice as well. Maybe they’re all too scared to go anywhere close to any path. However, near the main entrance, the Lainzer Tor, there are fenced-in areas where they keep a collection of the park’s mammals.
Yesterday I ran into a whole family of wild boars. I took pictures until one of the parents looked straight at me and grunted. I took that as a cue to leave! I walked around 14km (8.7 miles) yesterday, which took me three hours, not including the half-hour or so I spent at a restaurant in the middle of the woods.
The weather is still supposed to be great today, before getting a little cooler tomorrow, so maybe I should go for another walk today.

Today will be the last hot day of the year in Vienna, according to whatever radio station I was listening to this morning. “Hot” means 30°C (86°F), which is by far hot enough for me. I want to make sure I get out of the apartment today, instead of staring blankly at my laptop while refreshing my Facebook feed all day, waiting for something to change.
The past couple days weren’t bad at all, however. Saturday Kerstin had a pool party (no one but her brother and I went swimming), which was pretty fun. Sunday we went to go see Lady in the Water, which was mediocre. Nothing went on Monday, but Tuesday was an eventful day instead. I got a haircut with Kerstin, Kathi, Kathi’s boyfriend, and Nikki at this cool salon in the 19th District. For once I wasn’t asked the dumb “what do you want done” question. Instead my hair was grabbed and I was given a suggestion, which I simply agreed to. The end result turned out pretty great. Thorsten’s grill party was that night, which again was pretty fun.
Tonight we’re off to Passage, a fancy club under the Ringstraße. I usually don’t go there, but there is always room for exceptions in my life!

After a long day of work yesterday (9:30am to 5pm), I went to see Miami Vice with Kerstin, Oliver, and Thorsten. The movie was pretty good, although the ending was kind of sub-par. This might be attributed to what I read on Wikipedia, namely that Jamie Foxx walked off the set before the movie was finished filming.
Afterwards we went to Sparky’s, then to Billy’s Bones. I hadn’t been to Billy’s since two spring breaks ago. It’s insane how much the atmosphere has changed from its insanity heyday a couple years ago, when it was packed every weekend. Last night it was virtually empty, but that’s not a complaint, as it’s a pretty cool place to go to, I have decided. The bartenders were nice, Starobrno was on tap, a couple girls at the bar asked me where I was from, we could play darts, and there was a random rugby game beaming out of the projector. I will definitely go there again sometime soon.

Wednesday night we ended up coming in third place at Merry Monk’s trivia night. We won the “Booby Prize”, which was four double-shot bottles of Jameson, a Jameson pen, lanyard, CD holder, etc. Second place received €30, and first an insane €80 and a full-sized bottle of Jameson. I should mention that we partly owe our third place to Kathi and her friend Isabella’s knowledge. We have to come in first some time again though… I know it’s possible.
After trivia night nearly everyone went home, but Kerstin was nice enough to stay out with me until three or so. 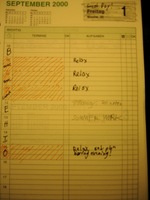 This week always causes flashbacks in my head as it is the week when school started for me the last seven years. This year it’s especially awkward since I’m not currently in any educational program… The first time in two decades.
My dad’s apartment here in Vienna is full of history, mostly because I never throw anything away. The other day I found my day planner from 2000-2001, aka 11th Grade. I always loved the first week or two of school, because I had absolutely nothing to do. Look at the planner page I attached to this entry. It’s from Friday in the second week of school… And I had absolutely nothing to do!
Ironically, it’d be the first Friday of school today, and I still have nothing to do!

I’m looking forward to two events this week: Trivia Night on Wednesday and my self-proclaimed start to fall this Friday.
Trivia Night at Merry Monk has expanded quickly since the first time Chris, Oliver, Stani, and I participated (and won) the first time in June. After a four-week hiatus due to the World Cup, it has really started to gain momentum. Last week we had about 14 people from our high school alumni base participating in two teams. It’s becoming pretty crazy.
I can’t believe the summer is already nearing its end. That’s simply insane. Since I am constantly being reminded by people having their “last night” parties and what-not, I decided to simply try to put it in a positive light and simply kick off fall this Friday night. That’ll be at Lukas, the perennial favorite bar of my historical core group here in Vienna.
If you have Facebook access you can check out the event listings of these two events and add yourself if you are in Vienna:

It’s been over two months since I last posted a life-related entry, so I figure I should post an update…
Late May and early June are always the same in Vienna. A good number of high school alumni are back, and they essentially go to the same bar, Lukas. The first couple weeks were pretty good, as you can see in the photo section of my website. Of particular note were two nights: June 3 (After Graduation) and June 13 (End of the Year Quarry).
The World Cup helped in keeping the rest of the month somewhat interesting. There were some good nights, as can be seen in the photo gallery, but it was more calm in general.
Thankfully Kerstin came towards the end of the month, who, along with Chris, Kenneth, Oliver, and sometimes Stani, kept life fun. We had multiple small parties at Kerstin’s house, went bar hopping, took two trips to Neusiedler See, etc.
My summer plans changed significantly two Mondays ago, when I met a man downtown who forwarded my contact information and background, which led to an interview, and now a potentially permanent job in Vienna. Originally I had planned on going back to the States in mid-August.
Right now Vienna is kind of in a boring spell, save for the occasional random weekend night insanity. Chris is leaving Sunday, but Thorsten is coming Wednesday, followed by the return of Kerstin on Friday. It looks like it will be a fun August. Maybe I’ll actually update this weblog, but otherwise you can update yourself using the photo gallery.