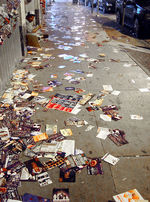 Ducking from and slipping on handbills is going to be a thing of the past on one side of Mariahilfer Straße, Vienna’s busiest shopping street. Why only one side? Because the street forms the border between two of Vienna’s districts, and only one of these has banned their distribution.
Mariahilf, Vienna’s 6th District, run by the Social Democratic Party, recently decided on this ban, to be enforced after a couple “information days.” Neubau, Vienna’s 7th District, run by the Green Alternative, has not voted on such a ban. Seeing that it’s the Green Party, however, it’s doubtful that handbills won’t also be banned on their side of the street soon, as otherwise it would be twice as littered as it is now.
I don’t really know why I mentioned this, but it seems like a humorous case of inner-Vienna politics. Additionally, I really hate handbills… Intensely. Especially on Saturdays, it’s impossible to walk down Mariahilfer Straße without having arms fly at you from every angle with some dumb handbills (often given out in sets of two or more so the distributor gets done quicker) advertising some junk you’re not interested in. I’m pretty sure around 15 percent of the flyers end up in the nearest trashcan, and all but one percent or so of the remainder end up on the street. The end result is a scene like the one in the random photo of a street in Miami that I have attached to this entry (I couldn’t find one depicting the situation on Mariahilfer Straße).
Image Credit: