Anyways, I might as well sit here and type out a summary of my travels today. It was a traffic nightmare. I left at 10:40 and got to Syracuse at 1:15. What’s wrong with that? It’s a 75-mile (121-km) trip! It usually only takes me a little over an hour, but today it took me two hours and 35 minutes. First there was paving being done near the Onondaga County line. This slowed down traffic to a halt. Then there was an accident-related detour immediately after that. A truck had jack-knifed right before the Onondaga Nation exit, requiring the entire interstate to be shut down in that direction for a five-mile segment. Traffic was diverted using the parallel two-lane highway. What a mess that was.
(The power just came back on!)

Anyway, I had planned to do some assembling and arraigning in my apartment before picking up my dad around 2:30. Thanks to this delay, this plan didn’t materialize. I barely had enough time to unload all the stuff I had brought and then go eat something.
The trip back went fine. For the first time since I’ve been back in the States, it actually rained a decent amount though. Since the Johnson City traffic circle project is a real nightmare right now, I decided to use the Vestal exit, which is a relatively long detour, and leads me over Pierce Hill Road, one of the steepest in Vestal. Apparently it had just been coated today with oil and gravel, which was now wet. What a mess. To avoid damaging my car’s paint job, I drove the entire two or so miles (3.2 km) at 15 mph (24 km/h).
I am so sick of driving right now. 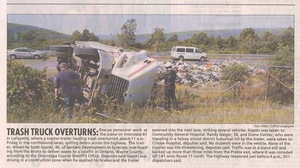